It’s been a while since I’ve done this; and considering the amount of work, stress, and emotion the last few weeks have put me through, I need this. I need this to remind myself why I go on, why I bother, and why I live.

Whenever a province captures my heart, I am at a loss and wonder how I manage to survive the frantic life in Manila. The last time I felt this unsure about city life was a year ago, after my visit to the cool and heavenly mountains of Bukidnon. One year later, I’m still lucky enough to visit places that are worlds away from the buzz of civilization. This summer was certainly an eventful one, beginning with our first (incomplete) barkada outing at Kota Kinabalu.

Us girls with our travel companions for the trip

Kota Kinabalu is a quiet town, occupying what seems like only one-fourth of Sabah, Malaysia. We arrived on a Friday night; the only noise we heard was from the band playing downstairs at a tourist bar. Otherwise, crowds could only be found at local restaurants or in the mall centers found near the major highway.

The sleepiness of the town is enclosed by tall shrubberies and trees growing out of Mt. Kota Kinabalu. Although we were unable to stay long enough to go there, it was clearly the highlight of the area. According to the tours that are arranged by local hotels, a trek can take as long as two to three days, with an overnight at a lodge in the mountain area.

And then, there’s the deep blue Sulu sea surrounding the coast.

Beneath this cool, aquamarine water are all sorts of fish that are swimming about hard and soft colors. Even in the shallowest depth, I easily spotted nemo, along with some sword fish, butterfly fish, Turquoise Moon Wrasse, and many, many more schools that were traveling about. I fell instantly in love with the underwater world and wanted to stay submerged in it.

Four weeks later, the sun welcomed me once again into its warm, UV-filled arms into a not-so-secret paradise, Puerto Galera. This time, though, it was in shores and in a sea more familiar to my heritage.

Spotted: a starfish at Bayanan Beach

Puerto Galera has had its fair share of bad press in the last summer. I’m not denying these reports, but neither am I denying the fact there are other sides to this bay that are still worth seeing and staying in. 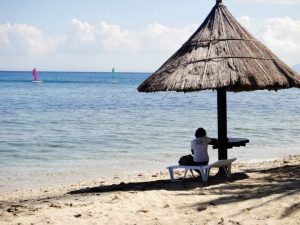 Leave the overcrowded sands of White Beach and opt for a quiet night instead of a Mindoro Sling, and you’ll find that a silent vacation can be found in popular beach areas.

I’m not going to reveal any more about my new found paradise. The rest, as they say, will be history.

My summer excursions didn’t quite end with the beach. My friends (this time, COMPLETE!) opted to explore new landscapes up north at Ilocos Norte.

From the Laoag’s La Paz Sand Dunes, the vast, sloping terrain of Palpalooka Adventure Park in Burgos, to the waterfalls and ocean of Pagudpud, we were overwhelmed by the sheer, effortless beauty of nature and its diversity.

Overlooking the West Philippine Sea on my stallion (este, pony) and the blood of my blood (er, si kuya). This endless deep blue is overlooked by crevices, corners, and slopes formed by the greenery of a mountain. Feel like a Khaleesi or a northener (although in Dorne weather) scoping out the terrain for the King in the North at Palpalooka Adventure Park’s horseback riding–only Php150/hour!

My beautiful friend, van seatmate, and sleeping buddy Trix after the horse took her to check out the crashing waves. A horse ride at Palpalookan starts on top of a mountain and goes down into the sea

Pushing our boat into the terrifying waves that crash against the shore of the Bangui Windmills? Not really! But even from the horse ride, you can see the tall, looming presence of the windmills

An ice cold dip at Kaibigan Falls, our last stop in Pagudpud 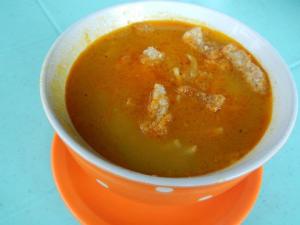 Capped off our adventure with a bowl of miki from a carinderia near the airport. I’d go back to Ilocos just for this noodle dish

There’s no denying how much more of my beautiful country I have yet to explore. Thanks to my awesome travel mates, the tour guides who accommodated us, and the kuyas who taught us so much about our country in between.